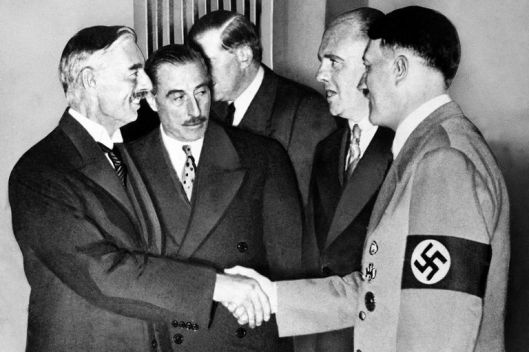 As Sir Max Hastings once said: “The very name has become a byword for betrayal: Munich.”

On 30 September, 1938, in the early hours of the morning, British and French prime ministers signed an agreement with Adolf Hitler in Munich, tacitly consenting to the dismemberment of Czechoslovakia. Both feared Soviet Russia more than Nazi Germany. Eleven months later, the whole scenario repeated itself in Moscow, where Ribbentrop and Molotov signed an agreement which sealed the fate of another country: Poland. That time, the USSR was feared more by Western democracies than by Nazi Germany.

The agreements signed in Munich and Moscow led the world directly into the Second World War. They were points of no return. Europe was moonwalking in 1938, just like she did in 1914.

Returning to London, British Prime Minister Neville Chamberlain declared the agreement to be “piece for our time”. Before a grateful crowd, he waved the notorious hand-written piece of paper which he had persuaded the German leader to sign. As we know now, the phrase “our time” meant just eleven months.

Is Europe moonwalking again in 2018? The Munich lessons are, indeed, relevant today once again – and maybe they are even more so today than they have ever been over the past eight decades. Democratic and liberal leaders appear, again, helpless, clumsy, fearful and humiliated when dealing with strongmen; not only with big ones, such as Trump or Putin, but also with regional ones such as Erdogan or Orban, and sometimes even with some very small ones such as Dodik or Thaci or Vucic.

Hysterical crowds are now gathering around Twitter and Facebook, praising every nonsense – providing, of course, that that nonsense was told or written by some strongman, whoever he or she might be. Appeasement – a diplomatic policy of making political or material concessions to an aggressive power in order to avoid conflict – rides again, by and large.

When speaking privately over dinners, European leaders, more often than not, complain about the brave new world, based around fake news and post-truths. The morning after, however, brings them back to the sober reality: Realpolitik prevails, once again, over core values which they cherish.

European liberals and leftists remain hopelessly divided – as, indeed, their grandfathers were eighty years ago – over ideological trifles, while baleful sounds of Gunter Grass’ Tin Drum are echoing throughout our continent. Steve Bannon roams through Europe in a frantic attempt to put sounds together in a symphony of evil, just as Alfred Rosenberg did in 1938.

Some countries decided to fight for their souls. France, Germany, the Netherlands, Sweden, Slovenia and Macedonia, for example, in the last few years have successfully resisted the four horsemen of the Apocalypse: Nationalism, Xenophobia, Populism and Particularism. Some other countries, such as Austria and the US, are still fighting. And the southern and eastern fringes of Europe – Italy, Turkey, Serbia, Hungary, Ukraine and Poland – still need to start their own fights against evils which are both their own but, indeed, common ones, too.

Still, only democratic leaderships are able to resolve the long-standing regional conflicts on an entirely new basis. When signing the Prespa Agreement this June, Greek and Macedonian leaders, Tzipras and Zaev, did just that: they acted as tomorrow’s friends, rather than as yesterday’s adversaries.

Same or similar conflicts, however, appear to be completely unresolvable if handled by authoritarian strongmen. Vucic and Thaci are incapable of solving the Serbia/Kosovo issue, as they both intimately want to keep their societies locked in the nightmare for as long as possible. Both of them know, very well, that ethnic hatred and fears of a new war still remain their best chance against modernity, Europe, and their own peoples, respectively. They also know that the criminalized elites, that they are at the top of, are utterly incapable of building up societies around core European values.

Faced with an aggressive Trump administration, geopolitical challenges from Russia, security ones from Turkey and economic from China, the EU’s Mogherini and Hahn deal with Thaci and Vucic within the same matrix which Chamberlain and Daladier wrongly applied in Munich: if we give them everything they ask for, maybe we’ll be able to preserve the peace? History already provided the answer to that question.

In an increasingly complex world, Europe can only survive if speaking with one voice. That explains why her global competitors – the US, Russia and China – are happy to see Europe fragment itself further, and why they cherish any sign that Europe has abandoned its inherent values of the Union: an antifascist heritage, the rule of law, human rights, secular state and free media.

The elections for the European Parliament, in May 2019, therefore remain crucial for shaping the new European identity. Whether it will be about Ukraine, Brexit, Kosovo, Cyprus, Syria, Iran or transatlantic trade, the fate of our continent will ultimately depend on the people capable of understanding what is at stake and who are ready to fight for it.

As the Athenian general Chabrias said in the 4th century BC (according to Plutarch): “An army of deer commanded by a lion is more to be feared than an army of lions commanded by a deer.” That sentence still remains one of the key lessons from Munich.